I am having a lot of fun talking with my son who is a Marine officer, and finds organization development fascinating – it’s so cool. 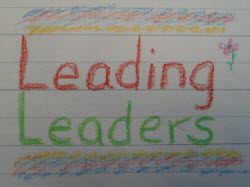 He is in his third year now in a leadership position and has all sorts of observations on effective (and ineffective) leadership.

We were talking earlier this week about how the roles change when officers are promoted from company grade (Lieutenant, Captain) to field grade (Major, Colonel), and how it is sometimes difficult for the newly promoted field grade officer to give up the hands-on leadership approach that he/she had as a Captain.

My comment to him was that it is similar to civilian business, where managers who are promoted to directors often struggle with the new role and responsibilities.

As I thought about our conversation, I was struck by how significant a difference this career move can be.  Often, when someone is promoted to that director/executive/”field grade” position, they no longer lead a group of people, they now lead leaders.  In many ways, this requires a similar shift of skills as when an individual contributor becomes a manager.  It also holds similar challenges, particularly if they now have former peers reporting to them.

After my comment about becoming “leaders of leaders“, my son said, “Huh – I never thought of it that way.”  I wonder how many people in the position think of it that way and realize the significance of the move?

I find that in many organizations, this group is the group most ignored when it comes time for formal and informal development.   Most organizations invest in training managers on the basics, but less frequently do they engage the “leaders of leaders“.  These executives are typically extremely busy, and often feel as if they “arrived” at their executive position because of their past success, so they feel they shouldn’t “need” development.

But yet, it is often this level of leadership that does need to learn to think and behave differently.  This level of leadership is making larger, critical decisions about the business.  They have arrived at a level in the organization where they are leading a business unit, so they have to balance their decisions against both their business unit and the organizational needs.  While they have overall responsibility for a major part of the business, they need others outside their scope, so must learn to build trusting relationships and influence outside their direct control.  And they need to build an engaged workforce without direct control.

But none of these things can be taught in a “class.” Yes, concepts can be introduced and awareness heightened, but development of this nature is multi-faceted, experiential and reflective.  What is ironic, is that these same people are developing and learning but they may not even realize it.  How do they develop?  The Center for Creative Leadership says they develop through “diversity and adversity” and that the elements of leadership development are assessment, challenge and support. (McCauley, et al, 1998)